We have a pact, you and I. I write down what song I had in my head when I woke up in the morning. And, maybe, why. You click on "What's in your waking ear?" and tell me what's in your head right now. We discover new music and maybe learn something about how our minds work. Yeah?

Hi. So I got a new job in January, and it's demanding enough of my time where (a) my exposure to music has been much more limited and (b) I don't have a lot of time to post things on a blog. Or rather, I'm not making enough time for either. But I'm still alive, thanks for stopping by to say hi. I'll update randomly if I, as planned, start working a little more music back into my life and get a new computer that isn't powered by a gerbil wheel.

"The Passion of the Jew," a particularly nutty 2004 South Park episode lampooning Mel Gibson's movie, turns out to be incredibly prescient.

("Nellie" is former Mavericks coach Don Nelson, of course. Here's the bar's Web site, apparently authored by someone who time-traveled to 2006 right after finishing a 1998 Web design class.)

Don't ask me. I didn't even know about Lance Bass.

Google Ads sure are gossipy. 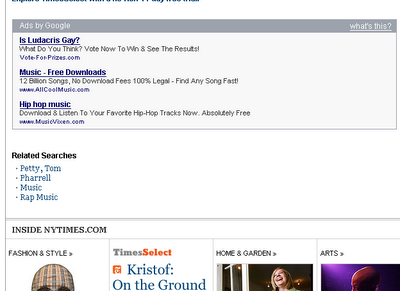 Have I ever spit something that you wanted to repeat, or have you ever quoted a line from one of my rhymes like you was talking in a casual fucking conversation? Give me a fucking break here. I be in that studio racking my brains to make two words rhyme together as well as say some shit in between those two words that make sense. And then, on top of that, transition between those two words to forming words into a sentence that has something to do with what I just fucking said. You know how much work go into that shit? And then to be understood over all that? You know how much work it take to do all that shit? That's why I'm like, yo, if you can't write no motherfucking rhymes, you shouldn't even be trying to tell me I can't bark. Saying he just doesn't make good songs; I'll go for that shit because a lot of dudes can rhyme they ass off, but they don't rhyme to make songs. But don't just outright say a dude can't spit. Because then it's like, oh, you not feeling where I'm coming from? Fuck you.

Tom Breihan interviews Method Man, who, it turns out, is still a genius. And is still pissed about the decline of The Jeffersons.

Matthew does a pretty good Elvis impersonation, but he's really a Pixies fan. A big Pixies fan. So big that he recorded versions of Pixies songs in the style of other artists, including the King, Tina Turner and Jimi Hendrix (who he absolutely nails). The Prince version of "Hey" doesn't work because it's really hard to do Prince, and Matthew could use some work on his Jamaican accent on the Bob Marley version of "Mr. Grieves." But overall this is really fun stuff, and it demonstrates just how successful Frank Black (with help from his friends) was as a pop songwriter. There is a reason these songs have stuck with us.

oh, manchester, so much to answer for

the tear that hangs inside my soul forever

silence is a rhythm two

The International House of Pussy

If You're Feeling Bitter

Letting Loose with the Leptard